There are a few variations of this, but the saying goes something like this. “You don’t choose your passions; your passions choose you”. How I came to manage category costs for food, beverages, and supplies.

My first job in hospitality came through a friend who was a line cook at a sports bar in Boston called Dockside. It was on lower State street well before the years of the “Big Dig”. He was the pizza man, which instantly made me the “pizza man helper” which really meant that I cleaned the Hobart, and the entire room under the basement stairs where we did all the grinding, and with a wire brush no larger than a toothbrush. I also cleaned the bathrooms (standard), received, and put away all the food (and beer) deliveries (of course). I can’t say that I learned a whole lot of culinary skill in this particular job, but I did learn the importance of checking everything when it was received.

I counted, weighed, and opened most every product that came in. (tip: you can count and then weigh cases of garbage bags, and then just weigh them after that to ensure proper counts) All was checked off the invoice and categorized into buckets. The Chef wanted even more detail so for each of the invoiced items, I marked each as either meat, fish, dairy, produce, or dry goods. They all went into the Food bucket. Beer, wine, and liquor went into the Beverage bucket, and pretty much everything else went into the Supplies bucket. This was a crucial part of organizing our Cost of Goods Sold (COGS) which I later learned to appreciate more deeply.

In that job, I eventually made my way to the “kitchen” via the dish machine, and I was lucky. Within a matter of days, I was promoted to line cook which basically meant that I cooked AND cleaned. I also learned how to throw dough for pizza!

I quickly became friendly with many of the kitchen staff in neighboring Faneuil Hall restaurants. There was Seaside, Cityside, Serendipity, Cricket’s, Lily’s, Houlihan’s, Magic Pan, Frog Lane, The Black Rose, Durgin Park, Thompson’s Chowder House, The Landmark Café, and the list goes on and on. I worked in a half a dozen locations before finally settling in.  After a few months I had worked several line positions including Pizza of course, fry, grill, pantry, and sauté. I became expediter, and in the mornings, I continued to receive product, and keep track of all inventory. When the restaurant I last worked was taken over by a larger group, I started to keep logs of pretty much everything that went on and reported it all up the chain.

We managed food costs weekly, and I tracked it daily. The process was meticulous but extremely rewarding. I kept 7 and 30 day rolling food cost averages, and broke everything down to each ingredient. This is where costs were defined, and this is where I started. Dry beans were part of Dry Goods and were assigned as Food. Beef, Pork, Lamb, Veal, Poultry, and provisional meats all rolled up under Meat, which of course rolled up under Food. In one concept I managed, we prepared a lot of game so elk, rabbit, boar, all rolled up under Meat, and then Food. Mostly it was straight forward. Fish was fish. Meat was meat. Produce was produce. I didn’t feel the need to break down between vegetables and fruits. Dairy included eggs, ice cream, milk, cream, cheese, and butter, yogurt, and while not formally dairy, margarine, sorbet and other nondairy products would get lumped in. Bread was another common category of expense and in some cases I did break things down further depending on the variety of product and expense.

Eventually this because a routine process for me that I took into every restaurant I worked at. In one of the Italian restaurants in New York for example, we separated all the fresh pastas so that we could monitor that expense as well. In a more recently consulting job we had, we noticed that they were already expensing French fries separately from all other food costs as it was an incredibly high expense that they wanted to track.

In most cases, the Food and Beverage expenses are always the focus as they are the primary product expenses in any restaurant. There is always some overlap between them, and so strong cost control always required clear definition of things like bar fruit, juices, mixers, sodas, fruit purees, and even recipe items like simple syrup. If it matters (spent any significant amount of money on it) then as with the French fry example above, you always want to have it broken down.

Fortunately, today there are good systems out there that automatically break down these costs for us, but for many operators, this method of tagging and subtotaling each category expense is still a routine. 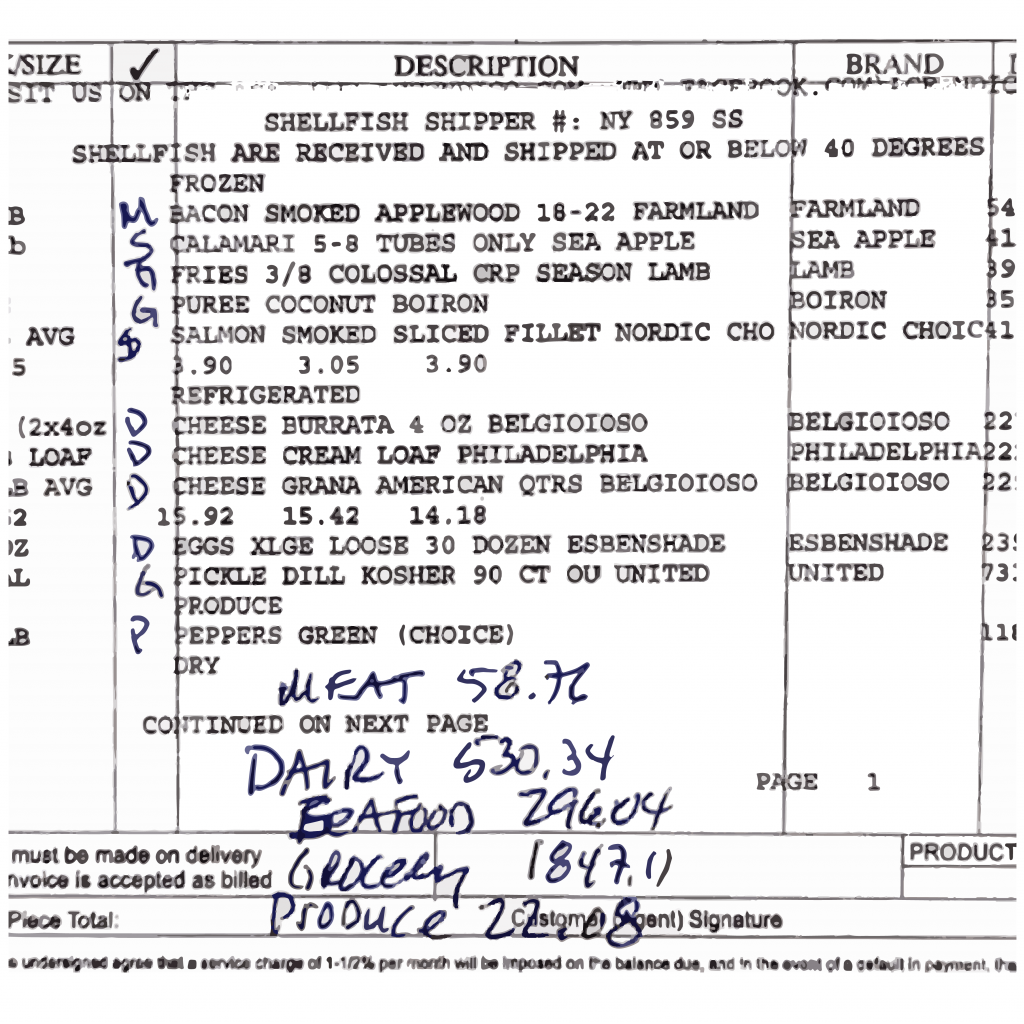 Some suppliers can breakdown invoices the way we need, but with the fast-moving pace of items that we buy, and with substitute products, and new items for specials coming in all the time, it’s not always such a reliable method.

Consistency being the almighty, it is also very important that items are categorized the same way all the time so that when making period comparisons, you can quickly identify problems and opportunities. If one person categorizes the lemon sour mix as a beverage, and then next puts it as dry goods, then the information is less helpful.

In my own evolution, every significant area of expense was tracked and controlled over time. It became pretty common for me to track things that impacted my costs in any way. Certainly, sales were the number one consideration and from there anything that impacted sales in any significant way also became very important. Weather is always at the top of the list, and especially if there is outdoor seating. Logging the daily weather conditions along with the food & beverage expense and sales set us up nicely to make projections in the next period once you pass your weekly, monthly, and yearly anniversaries. Holidays and any other event that may impact your business is important to note as well. St, Patrick’s Day, The Kentucky Derby, and The Superbowl, are common ones. All of this helps to better predict sales.

Once sales are estimated, projecting and managing budgets are a much easier task.

The below chart is a good example on how to organize this information. Sales will fluctuate from week to week, but the idea is to manage the percentages for each of the category buckets for Food and Beverage. 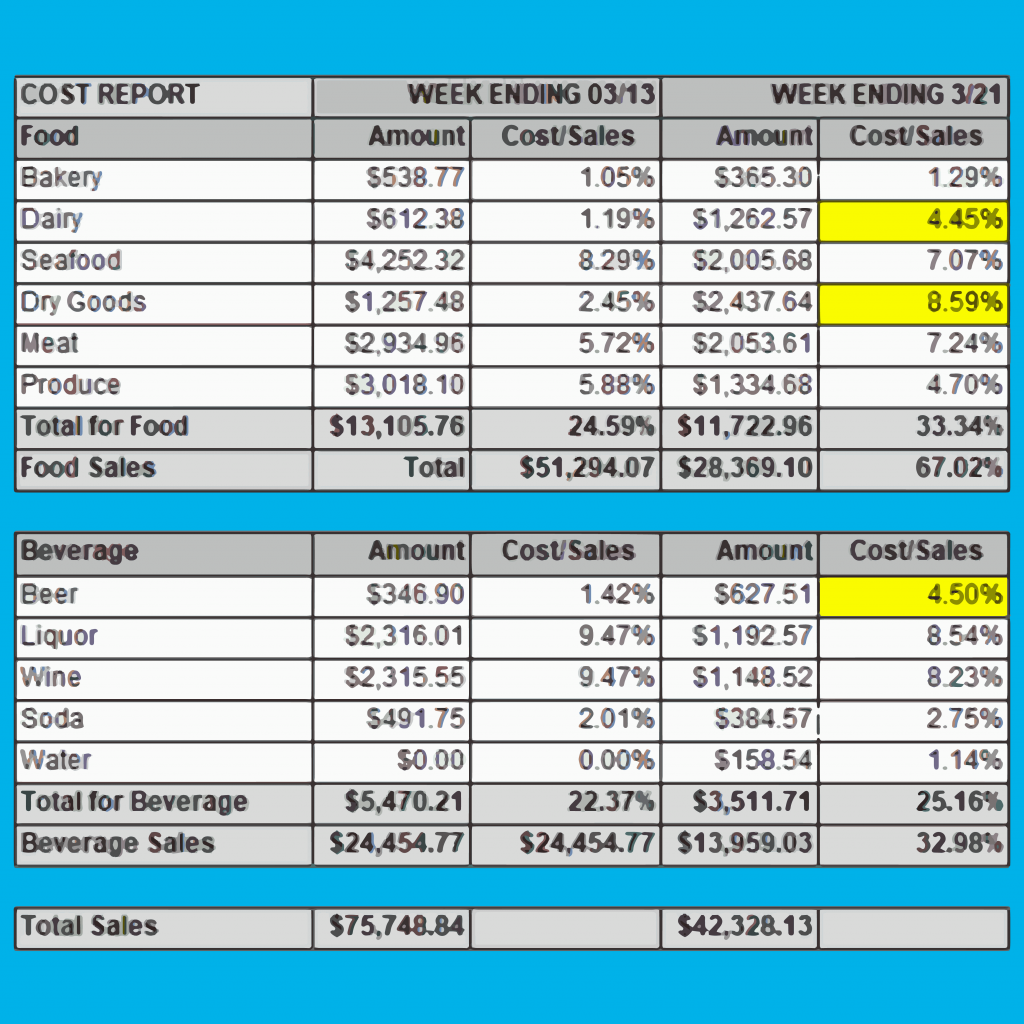 Reviewing these numbers each week allowed me to quickly isolate problem areas and forced a better understanding of the budgets for each area of expense and this approach can work for you too.

Managing all of the computations in the invoice example above for many remains a manual process. It also requires basic knowledge of each of the products purchased, so delegating the job to finance does not always produce accurate results.

If you are not used to managing costs in this way, you may want to start. Manual systems are a great way to learn so spend some time learning how the information impacts your business, but once you have it down, consider employing a solution that feeds you this information in the way you need it to best manage your specific requirements.